Just in time for St. Nicholas Day, I have two new stories in the Helen Shepherd Mysteries series to announce.

The first novelette is a holiday mystery called A Bullet for Father Christmas.

After the success of Christmas Gifts last year, I wanted to write another holiday story. However, I wanted to do something a little different this year, so I decided to write a holiday mystery instead of a holiday romance this year. And since I already had a mystery series with a steady cast of characters, it was a no brainer to make it a Helen Shepherd Mystery.

Of course, a Christmas mystery needed a plot, so I decided to come up with a holiday related crime and promptly had Santa Claus first turn to crime and then had him shot dead in the course of a robbery. Yes, I killed Santa Claus or rather Father Christmas in this story.

A Bullet for Father Christmas 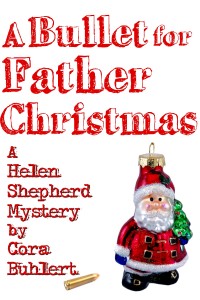 When two men dressed up as Father Christmas rob a London jewellery store and one of them ends up dead on the floor, shot by his own accomplice, it’s certainly one of the more unusual cases for Detective Inspector Helen Shepherd and her team. But as Helen begins to investigate, it turns out that the case is even more bizarre than she suspected.

But since the holidays are nigh and mysteries make good reading for those long winter nights, I promptly wrote another Helen Shepherd Mystery entitled Paris Green. If you know a bit about chemistry, the title gives a clue regarding the manner of death.

I got the idea for Paris Green from reading this article about the dark sides of Victorian fashion, a dark side which includes the fact that many of those gorgeous Victorian gowns were coloured with highly toxic dyes containing arsenic. I vaguely knew that many old pigments and dyes contained toxic substances and indeed “giftgrün” (poison green) is a common German name for bright green colours. But until reading that article I never realised how widespread that problem really was.

And considering that I worked in an antiques shop as a teenager, that was somewhat troubling. I’m still here obviously, but it’s highly likely that I had contact with dangerous substances at some point. And come to think of it, I did get quite ill while working there, after I had cleaned up some new acquisitions. At the time, I simply thought I’d caught some bug, but today I wonder…

That article not just caused me to take a long look at my personal collection of antiques (though most of my collection is not old enough to be a problem and the Victorian fashion plates that might contain poisonous dyes are kept safely under glass), it also bred a plot bunny along the lines of “What if antiques containing arsenic dyes were used to poison someone?”

Paris Green required quite a bit of research (particularly considering it was an eight hour challenge story), research that was both fascinating and unpleasant. Because it turns out that researching arsenic poisoning has the tendency to cause psychosomatic symptoms of arsenic poisoning. 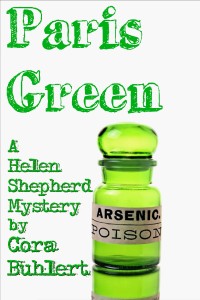 When intern Kitty Chan is found dead in the basement of the Victoria and Albert Museum, dressed in a Victorian ball gown, the cause of death is quickly established. Kitty died of arsenic poisoning. But who gave her the deadly dose and why?

Detective Inspector Helen Shepherd investigates and quickly realises that there is more to this case than meets the eye.

Warning : There are some rude words in this story.